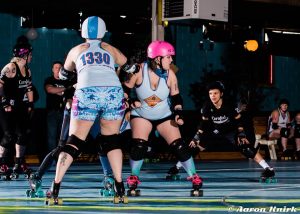 How are you feeling after your first season of roller derby? What was your favorite part of your rookie season?

I feel like my Rookie season was all about learning. Now that I’ve finished my first year, I am going to focus more on bettering myself, aiming towards personal goals.

When did you start with Burning River, and what is your role in the League?

I started by going to a watch-a-practice in March 2017, which I saw when a friend shared it on Facebook. I am a skater.

Did you have any experience with roller derby, roller skating, or any kind of sports before joining BRRD?

A little bit of rollerblading and hockey/ice skating. Not a whole lot though, not enough to prepare me.

Everyone has tough days when they are starting something new, especially something intense like roller derby. Did you have an AHA! moment during training that showed you that you could do this?

I was terrified of actually playing the game of roller derby. I avoided scrimmages like the plague. But then I was put as an alternate against Akron. I had to prepare for the game in case I played, so I went to the next scrimmage we had. I didn’t completely fail, and actually got lead Jammer once. I didn’t get hurt, and I knew more than I realized about the game. I felt prepared for my first bout after that, and then played in the Akron bout. 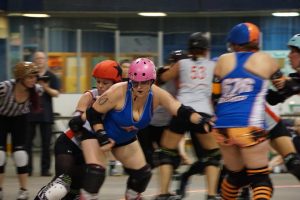 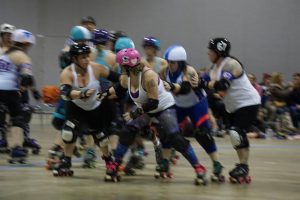 What is one thing that surprised you about being a part of roller derby?

My own body has surprised me in what it has learned in a year.

Its Bout Day! What do you do to prep for the bout? Any pregame routines?

Have a big breakfast that morning and relax, and listen to my pump up songs on the way to the location.

What is your favorite BRRD moment?

When we played Youngstown and All Stars went into overtime. And then Hazmat came out ahead of a really close game as well.

Why should people get involved in roller derby?

There is no typical “type” of derby player. There is a position for everyone to play up to their strengths.

What has roller derby done for you?

It’s amazing how practice releases the stress people have after a bad day. It just puts people in a better mental place after finishing a good/rewarding practice.