Burning River Roller Derby kicked off our 12th season on November 11th at the North Olmsted Soccer Sportsplex with our annual Black and Blue charity bout. The action-packed game pitted skaters from our league against one another to benefit  the Cleveland American Veteran’s Association, an organization dedicated to helping struggling and homeless Cleveland area veterans. 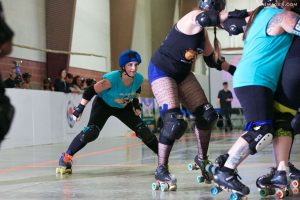 p and guest Captains Jeff Dean and John Sefick. Team Blue came out with an early lead, but with only one jam to go in the second half, Team Black pulled away with the victory with a final score of 185-179. Coco Sparx and MaLoik took home MVP Jammer and MVP Blocker for Team Bl 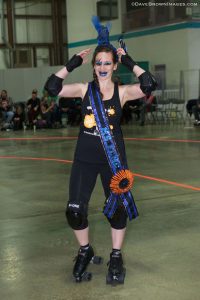 Outside of all the derby action, we were able to raise $1,000 for C.A.V.A.—a feat that would not have been possible without the dedicated support of our fans, volunteers, and officials.

Thank you to all that attended and provided support for this event, to our gracious hosts at the Soccer Sportsplex and FatHead’s Brewery, and to Jasmine Monroe and WKYC for helping us promote the bout!

If you are interested in providing support or making a donation to C.A.V.A., please visit www.cava4vets.org.

Burning River Roller Derby will return to the track on February 3 for a travel game against Akron Roller Derby. More information about our upcoming season can be found by following us on Facebook or by visiting BurningRiverDerby.com.